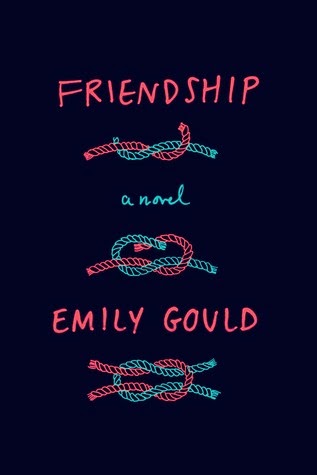 By the time my hold came through on Overdrive, I couldn't remember what prompted me to request this book in the first place. Yet, I started it Sunday night and finished it the following afternoon, opting for a long walk in place of a Pilates class so I wouldn't have to stop listening.

Bev and Amy are best friends who met while working at a publishing house in New York City. They're the unique kind of friends you form in your mid- to late-twenties when others around you are settling down and starting families, and you're adrift in a big city and need someone else upon whom you can depend. They've seen each other through their post-college years, and now that they're rounding the corner into their thirties, what was once a carefree existence barely making ends meet is becoming somewhat pathetic. As the girls struggle to determine where they go with their dead-end jobs and in their flailing relationships, they navigate this new phase in their friendship as well.

Gould does a great job with the characters - I know Amy's, girls who are used to having things work out but haven't put much thought into where they'd like to end up; and I know Bev's, girls who know what they wanted but once life got in the way weren't sure how to get things back on track. Gould lets the reader peak into these character's inner monologues, not shying away from their foolish decisions and the shortsighted selfishness that leads them to make them.

A few quick notes on the audio: there was a bit of timeline-weirdness with an extended flashback. It went on so long I wasn't sure if we had done a forward time jump and the story was still progressing, rather than providing background. It was weird when listening, but might have played out better in print. Amy Rubinate, whom I don't think I've encountered before as an audio narrator, also did this drawn-out hissing effect at the end of each sentence that was a bit grating on 1.25 (my normal listening speed). At first I thought it was just for certain characters who were supposed to be irritating, but it was done throughout the novel, unfortunately. When I sped up to 1.5 it was still noticeable, though the story grabbed me soon after & I got over it.

I finished the bulk of this audiobook in a straight marathon listen and enjoyed every minute. What I thought would be a light romp left me pondering the nature of growing up as a millennial and how our generation finds and defines our own families within the cities to which we've flocked.

Verdict: Affirmed, for fans of Lena Dunham's "Girls" and Meg Wollitzer's "The Interestings," young women living in big cities, and those who want to think about the roles our friendships play in our lives as we grow older. This short read has left me with topics I'd really like to discuss with others who have read it  - so pick up a copy & let's chat

"Friendship" by Emily Gould, audio narration by Amy Rubinate, published by Tantor Audio on September 23, 2014. Originally published in print by Farrar, Straus, and Giroux on July 1, 2014.
Posted by Nicole at 7:05 AM No comments:

Two "Good" Books That Didn't Work for Me

I discussed on Tuesday how sometimes, a book just won't work for me. I have learned to allow myself to put the book down & pick it up in another format or at a better time. Recently, I've encountered this feeling with two books: "The Buried Giant" by Kazuo Ishiguro and "Fourth of July Creek" by Smith Henderson.

If you follow me on Instagram (back when I could still open it on my phone...) you may have seen this beautiful cover make an appearance, For "Fourth of July Creek," I originally tried it in print, and just could not get into it. I returned it to the library and put myself on the holds list for the audio. I finished listening to it a few days ago. While it still wasn't my cup of tea, the audio was definitely the version I needed while running around to wrap up my semester. It's a dark book, about a social worker whose work hits a bit too close to his own life and whose cases take dark, surprising, disturbing turns. Maybe a bit too dark for when the weather is finally starting to warm up and I just want to be outside thinking happy thoughts. I'm glad I returned to it, as I appreciate the story Henderson told and the way he balanced the main character's work and his personal life. Though I might have enjoyed it more if I had given it a bit more time and returned to it in the winter, when I'm more in the mood for darker reads.

I mentioned "The Buried Giant" in my pre-spring break post, but in contrast to "Fourth of July Creek," I could not get through it and haven't returned to it. I initially went into this Ishiguro's foray into fantasy blind to the plot, knowing only that Ursula K. LeGuin had criticized his approach, and he had defended it. As I got deeper in though, I started reading reviews to try to figure out what Ishiguro was up to so that I could gain an appreciation for what he was doing. While the reviews discussing his themes of memory and history gave me an insight into the book, it just wasn't hitting the right notes. Axl and Beatrice are an elderly married couple who embark on a journey to visit their son - it's an endearing premise. At least they started out that way. Maybe if Axl hadn't bookended every sentence he spoke to Beatrice with the term of endearment "princess," I would've made it a bit further. That was the last straw that pushed me to put down the book. It's entirely possible I didn't make it far enough to start caring about the characters enough; I stopped on page 87. I plan to return to this book eventually - I respect Ishiguro too much not to - but it'll have to be at a time where I'm ready to let the book wash over me, rather than when I'm looking for something to grip me and pull me in.

"Fourth of July Creek" by Smith Henderson, audio narration by MacLeod Andrews and Jenna Lamia, published by Harper Audio on Mary 27, 2014. "The Buried Giant" by Kazuo Ishiguro, published by Knopt on March 3, 2015.
Posted by Nicole at 7:05 AM No comments:

I didn't learn to put a book down until I was in college. An aggressive reader as far back as I can remember, I've always carried a book with me, read quickly, and consumed large quantities of books each year. When I was in college, I learned two important things: it's OK to read more than one book at a time, and it's OK to stop reading a book if you're not into it. Neither of these are particularly new concepts to those in the book blogging world, but I figured I'd share how I came to these realizations myself.

I needed to learn the first lesson to learn the second. In college, when I was reading a book or more each week for my English classes, on top of reading for other classes and keeping a novel going for fun, I realized I was reading multiple books at a time and it was just fine. Post-college, I realized different formats work better for me for different types of books: I've had trouble getting into non-fiction in print, but in e-book or audio I sail through it; I prefer literary books with long prose in print so I can savor the words on the page. As I expanded my formats, I settled comfortably into reading 4-5 books at a time: one in print, one in audio, one in e-book, and usually an extra in one format or another for a book club or that was due back at the library.

With this new-found flexibility, I realized how helpful it was to be able to switch books when something wasn't working. I could put a book down and return to it later when I was in the mood. I actually read books faster this way, since I wasn't slogging through a weighty literary tome when I really felt like a romance novel. Yet, there were some books I started and just never got back to. When I finally let them go, either returning them to my shelf or back to the library only half-read, I felt like I knew enough to discuss them (because they were usually new releases I got off the holds list before I was ready, or stalwarts of a genre of which I'm a fan) and make a decision about when I felt best about returning to them.

It's a strategy that's been working well for me. Perhaps most importantly, it's kept me actively reading throughout law school because I have the flexibility to read in a variety of formats, and give myself the opportunity to read whatever book sparks my interest at any moment. At the end of the day, as long as I'm still reading, I'm happy.
Posted by Nicole at 7:05 AM No comments: 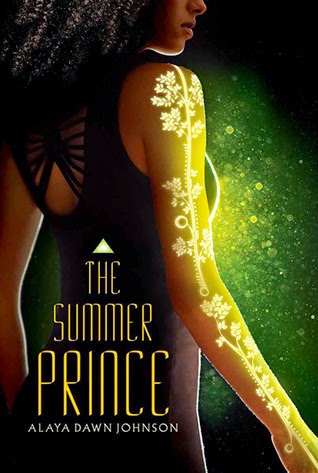 In future Brazil, Palmares Três is a carefully-managed city run by a council of women, led by the Queen who is chosen by the elected Summer King at the moment of his death. June Costa is a young woman born into one of the highest tiers of this society, who strives to become a famous artist. She and her best friend both fall in love with Enki, the Summer King from the lowest tier. When she realizes Enki is a fellow artist, they work together on art projects intended to inspire the citizens of Palmares Três to question the rigid rules in their society.

The novel tackles a lot in a tiny package - gender roles, race, ageism, the role of technology, population control, class struggles, etc. I'm glad to see these complicated issues brought up in relation with one another - they do not happen in isolation, and the book recognizes that they're all at play at any given time. Yet this survey approach does mean that no one issue is explored exhaustively. It allows readers to make their own evaluations, but did leave me wanting a bit more information about the evolution of this society in order to better reflect on these issues. Johnson doesn't reveal how the strange government system, which requires the death of an elected king every five years, came to be until the very end of the novel. Readers probably would have benefited from an earlier discussion.

Nevertheless, I was enthralled with June and Enki's story. Her relationships with the supporting characters, especially her best friend Gil, and her mother and step-mother, only added to June's rich story. I also appreciated the progressive view of sexuality and relationships - in this society there is a complete acceptance of non-heteronormative relationships, so much so that it's not even a plot point that June's mother remarried a woman after June's father's death. Johnson demonstrates an openness and acceptance that deserves commendation.

Verdict: Affirmed for fans of dystopian YA. If "The Hunger Games" and "Divergent" are your jam, definitely throw this in the mix.
Posted by Nicole at 8:26 PM No comments: