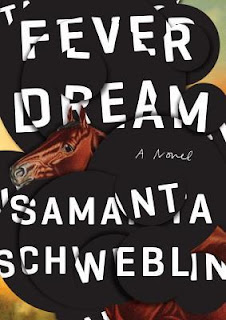 I requested this from the library after Liberty Hardy recommended it fervently on the All the Books podcast. It was a great recommendation, and probably not something I would've picked up otherwise.

An unrelated mother and son are in a hospital, striving to pinpoint a specific moment by recounting the events that led to their current situation. Amanda is the mother, vacationing with her daughter Nina while her husband works & plans to join them for the weekend.  David is the son, a neighbor of Amanda's vacation rental with his mother Carla. Carla has insisted to Amanda that David is not right, and Amanda fears for her daughter.

Told in an alternating dialogue between David and Amanda, this short book spins its tale in quick, furtive bursts that are rife with detail and mystery. I was afraid along the way that the answer would be too complicated for me to comprehend when I reached the end, leaving me unsatisfied and out of my depth. Luckily, that was not at all the case. I was surprised and pleasantly puzzled, and, just like Liberty, flipped back to the beginning to puzzle over this strange story.

From her bio on the book flap, Samantha Schweblin has been recognized by Granta as a top writer in Spanish under 35 and received several literary awards. Though this is her first novel, she has published three short story collections. I will be hunting down any of her work that has been translated to English & hope to see much, much more from her.

Verdict: Affirmed. This was a weird little book that I found utterly compelling. I'd love for someone  to read it so we can discuss and puzzle it out together. 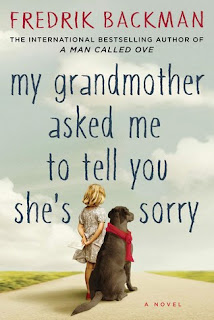 If you have been reading my reviews for a while, you know that "A Man Called Ove" made my top 10 for 2014, and I was similarly smitten with "Britt-Marie Was Here." Yet somehow, Fredrik Backman's sophomore novel almost escaped my notice. And what a shame that would have been, because it is my favorite of Backman's novels so far.

Admittedly, that descriptions sounds like trite jacket copy. But I don't want to spoil any of the truly lovely, heartwarming details. Basically, this book gave me the warm fuzzies, as my first-grade teacher would say. Elsa's grandmother was a fierce woman, with an admirable devotion to her granddaughter and others around her. She and Elsa are both offbeat in that way I've come to associate with Backman protagonists -- gruff and defensive on the outside, but driven and loyal once tasks have been set and friendships have been developed. The clever plotting and intricate details are lovely, but it is ultimately Backman's unforgettable characters that breathe life into his novels. This one is no exception, and Elsa and her grandmother have become two of my favorites.

A bonus - Britt-Marie of "Britt-Marie Was Here" got her start in this novel, and it's wonderful to see how the seeds of her story were planted here. I can't wait to get to my review copy of the next spinoff, "Beartown," in time for its release in two weeks! (Thanks Atria!)

Verdict: Affirmed. Elsa will charm and endear you as you follow her on her grandmother's last adventure.

"My Grandmother Asked Me to Tell You She's Sorry" by Fredrik Backman, published June 16, 2015 by Atria Books.
Posted by Nicole at 6:43 AM 2 comments:

"You Will Know Me" by Megan Abbott 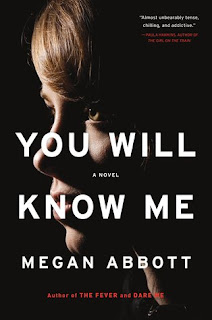 Many know that this was the novel Abbott was inspired to write after seeing Aly Raisman's parents watch their daughter compete. What is it like to be inside such a family, where everyone's hopes and fears are pinned to a single member and her solitary pursuit?

If that is the jumping off point, Abbott pushes it to extremes, adding an untimely death in uncertain circumstances to the mix to create a novel that is part family drama, part mystery.  Devon Knox found gymnastics after a freak accident with a lawn mower when she was a toddler.  Since then, her parents Katie and Eric have shaped their lives around getting Devon to the Olympics, dragging her amiable younger brother along for the ride.  Their lives are spent at her gym, among the coaches and other parents. Yet the death of someone in the gym's orbit threatens to derail the Olympic dreams everyone in Devon's orbit has been pushing her toward.

Where "The Fever" stood out for its portrayal of relationships, You Will Know Me focuses on Katie, just one member of the Knox family. It's structurally necessary to limit the information available to the reader and to better maintain the mystery. Yet, it also provides the basis for exploring the underlying theme of how well can you ever know your children and family. The focus on Katie enables the mystery, but constrains the ability to explore the depths of what different parents will do for their children and how parent-child relationships can vary greatly within a single family.  Nevertheless, it's a compelling read, and particularly good on audio.

Verdict: For fans of mysteries and family dramas, this is a solid, quick read.