"All Our Yesterdays" by Cristin Terrill 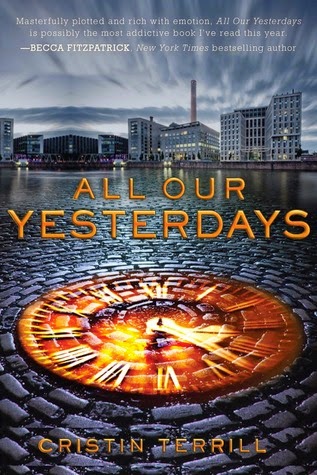 If you want a more serious YA time travel pick than "The Here and Now," "All Our Yesterdays" has deeper themes and a bit more action . It gets bonus points for having the bulk of that action take place in DC, even if their description of Columbia Heights is a bit outdated. I'm going to spoil more than I normally would below, because the story on its face simply isn't interesting without some of the intricacies. If you like time travel, and don't mind a tortured (in several senses of the word) YA heroine, check this out unspoiled. If you need more convincing, read on.

The tale opens on Em in a prison, discovering a note from a previous version of herself. She is being held captive with her friend Finn, and together they escape their cells in order to go back in time and save the world. The novel then cuts to the other narrator Marina, who you pretty quickly realize is the younger Em. Her best friend and love interest, James, is a a genius scientist. James's other best friend is a smart ass named Finn who Marina can't stand. Em and (older) Finn travel back in time to kill James and, in doing so, prevent him from inventing time travel and ruining the world.

Some of the science elements are unconvincing. Most notably, time is sentient & acts to prevent paradoxes in an unconvincing manner. The sentience is more of a plot convenience than a valid idea worth exploring. But since time paradoxes make my head hurt anyway, I didn't worry about them being explained away by a strange phenomenon and just enjoyed the adventure story.

I got this audiobook for free through the amazing SYNC 2014 summer program, and probably would never have known it existed otherwise. Over the summer, they give away a pair of audiobooks each week - one classic & one contemporary that share a thematic link. "All Our Yesterdays" was a perfectly serviceable time travel tale given away this year with "Julius Caesar." Pairing this with "Julius Caesar" gives it a depth I might not have recognized without the explicit connection. At its heart, the story is about the power of true friendships and how power corrupts.

Verdict: Affirmed, with some caveats. I'll check out the sequel when it's released. If you're a fan of YA SciFi, you'll enjoy this one. It probably won't hold up to a cross-genre read though, so I won't recommend to people who don't usually read within the genre.

"All Our Yesterdays" by Cristin Terrill, published by Disney Hyperion on Sept. 3, 2013. Audiobook narration by Meredith Mitchell, published by Tantor Audio on March 18, 2014.
Posted by Nicole at 10:21 AM