I've been reading pretty casually lately since I've been so busy. I've finished a few books that didn't quite merit full reviews, but are still worth a brief mention.

"All the Light We Cannot See" by Anthony Doerr

I was excited to read this book for both my NYC and DC book clubs. It got a ton of positive buzz and won the Pulitzer, after all. Basically, I thought it was just fine, but wasn't blown away. Maybe I'm being more critical of it after all the acclaim it has received, but I don't feel this is in the same league as "The Goldfinch" or "The Brief Wondrous Life of Oscar Wao." It has its charming moments, clever turns of phrase, and nifty novelties, but I don't think it adds anything substantially new to World War II novels. I'd recommend to fans of that sub-genre within historical fiction and those who like a heartfelt tale, but not much more widely. 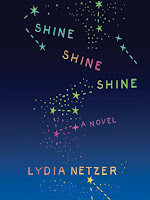 This audiobook, on the other hand, was underrated. I remember the buzz when it was first released, but it never really rose to the top of my list. I downloaded it on impulse when I saw it was available on Overdrive. It's difficult to capture all of the great things this novel has going on in a brief overview, and that might be why it didn't get quite the amount of attention it really deserved. Sunny's robot-programmer husband is up in space, and she's bald and pregnant back on Earth raising their autistic son. Though she tries to preserve her facade of normalcy, we learn just how unique and strong she really is. I can't put a finger on all the themes at play, but I thoroughly enjoyed this novel.

"Lord of the Scoundrels" by Loretta Chase

I appreciate a solid historical romance every once in a while, especially when I have a lot going on. I read this during finals and it was the perfect amount of escapism and smut. There's a reason this book has over 16,000 ratings and over 1,100 reviews on Goodreads. It's a textbook example of a rake romance - a smart, sassy woman and a devilishly handsome scoundrel who can't help but fall in love. But this novel executes the typical story line perfectly, with witty dialogue and steamy romance. As a romance reader who got started on Harvard-educated, Shakespeare-scholar Eloisa James, I have a high bar for my romance novels. "Lord of the Scoundrels" leaped over it without breaking a sweat.
Posted by Nicole at 6:10 PM