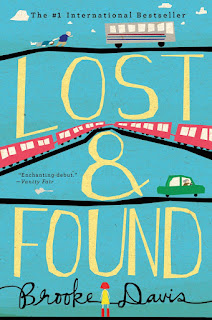 In honor of its paperback release today, I am re-posting my review of "Lost & Found" by Brooke Davis, originally published in the Morningside Muckraker.

(FTC Disclosure: I received an ARC of this book from the publisher in exchange for my honest review)

Seven-year-old Millie is obsessed with dead things, keeping a record of all she encounters. Following the death of her father, she is abandoned by her mother in a department store. Here, she meets Karl, a nursing home escapee, and Agatha Pantha, a reclusive shut-in, each grappling with losses of their own.

Karl is a typist by profession, still reeling from his wife’s death and his son’s decision to place him in a nursing home. Agatha was so shaken by the sudden death of her husband that she hasn’t left her house in years. Millie is trying to understand why her mother left her, and the three embark on a journey to find Millie’s mother before she leaves Australia for America. Hijinks ensure.

This quirky little book from debut Australian novelist Brooke Davis tried so hard to win me over. Millie is endearing, and Karl and Agatha have their winsome moments. But, ultimately, the characters were each a bit too out-there; the book lacks a grounded center to counter the crazy. This particularly shows through in the logistical gaps in the ending, which left me more frustrated than satisfied or pleasantly curious. Throw in some less-than-pleasing descriptions of body parts without any good reason and quotations written in italics, and things got a bit grating in parts. The author’s expertise in coping with grief and loss shines through at places, but is too often overshadowed by the quirk and crazy,

Verdict: Jury’s Out. It’s all a bit much for me, but the novel might appeal to some more explicitly interested in themes of loss and found families.