"Behold the Dreamers" by Imbolo Mbue 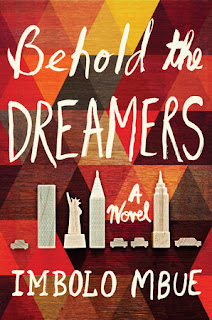 FTC disclosure: I received an e-ARC from the publisher through NetGalley in exchange for my honest review. I checked out the audiobook from my library through Overdrive.

Ah, this book. I tore through the audio, supplementing with the e-ARC when I couldn't listen.

"Behold the Dreamers" is the story of Jende and Neni Jonga, a couple who immigrate to the United States from Cameroon. They came to New York City to pursue the American Dream, like so many immigrants before them. We meet Jende as he is on his way to interview for a job as a private driver to Clark Edwards. Unfortunately, Edwards is an executive at Lehman Brothers, and it is the eve of the company's collapse. As the two families' lives intertwine, the reader can see the ruin hurtling toward them, and the country.

This is the first novel I have read that is set during the 2008 recession, and it captures that moment well. Even more so, it captures an immigrant experience with sincerity and an impeccable relatability. The Jongas' story is just one of many immigrant narratives, but certain elements are familiar in many such narratives. From their confusion and frustration navigating the broken immigration system, to their constant struggle to find work that will allow them to save while still supporting their family both in the US and in Cameroon, to their re-evaluation of the American Dream and how they can make it work for them - their story highlights the everyday struggles and the overarching system through which immigrants must fight.

The characters are well drawn, and the ways they fit into each other's lives are compelling and drive the story on. The relationship between Neni and Edward's young son, Mighty, is particularly touching. Each character makes their own mistakes. But they feel like honest, real-people mistakes, not mere plot devices. You will almost certainly disagree with some of these characters' choices, but you understand how they have been driven to make them. To top it off, the ending was both not what I expected going into the novel, and entirely satisfying, a difficult & rewarding balance to strike.

Verdict: Affirmed. There are many well-deserved reasons to praise this debut, but I expect the characters and ending will stick with me above all.