GUEST POST: "The Wall of Storms" by Ken Liu 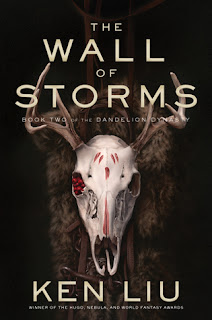 I'm excited to share a special guest post from one of my former law school peers, Tochi Onyebuchi. I had the honor of working with Tochi on the Morningside Muckraker, and he is an incredible writer in his own right. He has had fiction published in Asimov's, Ideomancer, and Panverse Three. He publishes his non-fiction writing at Boy Boxes Bear and tweets @TochiTrueStory.

Here, he reviews Ken Liu's "The Wall of Storms," the second installment in the Dandelion Dynasty. Please note, this review contains SPOILERS for the first book, "The Grace of Kings."

Sequels bear outsized burdens. They’re tasked with enriching a world introduced in their predecessor, deepening it while enlarging it, marking continuity, ensuring they carry the same genetic material while insisting on their own newness, their own uniqueness. Ken Liu’s debut was wuxia War and Peace. How was he going to top that? And what did that even mean?

"The Grace of Kings" ended with functionary-cum-bandit-cum-rebellion leader Kuni Garu betraying his former friend, the Achillean Mata Zyndu. By the novel’s end, Kuni, now Emperor Ragin, was poised to bring about a new era of rule to Dara, defined by fairness and justice. Mapideré’s tyranny was over. The epoch of divisions had ended. Rebellions extinguished, peace was imminent. But the novel’s ending aptly foreshadowed much of what would follow, confirming the suspicions of any reader who suspected that peace was an illusion.

"The Wall of Storms" is a bigger, better novel than "The Grace of Kings" and may be the best fantasy novel I’ve read in the past five years. Emperor Ragin’s two wives, his first love Jia and a woman he admires and adores in equal and different measure, consort Risana, work both in concert and at cross-purposes to assist and in some ways influence Kuni Garu in his governance of the Empire of Dara. The battle plays out not just in the administration of empire but also in the question of which of Kuni’s children will succeed him as ruler. Erudite, first-born Timu? His immediate younger sister Théra who struggles to stake her claim in a landscape still dominated by men? Or Phyro, the charismatic, battle-eager second-son? Fara, whose mother, a third woman, died in childbirth, is Kuni’s youngest daughter.

Additionally, a terrifying force from the north threatens what fragile peace Kuni has been able to bring about in an empire still wounded from recent war.

Despite its panorama, "The Grace of Kings" was Kuni’s story. "The Wall of Storms" multiplies its foci. Perhaps the most meaningful addition to the cast comes in the form of Zomi Kidosu, a young woman revealed to be a pupil of Luan Zya’s and who enters the capital at the novel’s opening to take part in the Imperial Examinations that grant posts in the Dara administration, a set-piece that triggered rather apocalyptic flashbacks of the Bar Exam. Zomi’s story is also an early indication of another of this book’s successes.

This novel is driven by women. With Jia, Risana, Théra, Gin Masoti, Zomi, and eventually the general of a ghastly invading force from the north, the preeminence of women in the narrative of the Dandelion Dynasty continues Liu’s project of upending those conventions of epic fantasy formerly taken for granted. It is one of the book’s wonders that the copious world-building and depictions of wartime research, the flashbacks, the theological ruminations, even the philosophical and linguistic analysis of Ano logograms do not prevent the book from being anything but eminently readable.

In "The Grace of Kings," Liu gave us wuxia writ large: an authorial perspective that dived from the tops of trees to examine individual lives, then ascended on thermal drifts to catalog the strategic placement of armies poised for battle. In "The Wall of Storms," Liu’s authorial viewpoint continues to dance.

The result is panorama and heartbreak in equal measure.

"The Wall of Storms" is its parent’s child, but as the stories people of Kuni’s generation tell their children are turned into wisps of myth, the world is being remade yet again, new, unique, its fashioners able to stand and fascinate all on their own.