"The Hammer of Thor" by Rick Riordan 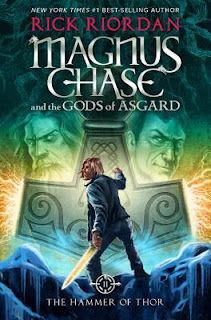 This series is on fire. I don't even think I can write a proper review, I just need to gush.

Plot is normal Riordan -- Thor lost his hammer, Magnus and crew have to go find it. I mentioned in my post on "The Sword of Summer" (Book 1 in this series) that his books are a bit formulaic, but the diversity shines. And then this book just stepped up the game even more.

In this book we see two fantastic developments. First, Alex. Alex is a gender-fluid character and child of Loki. She is fiery and intense and a possible love interest for Magnus. Moreover, the book naturally handles explanations of gender fluidity in age-appropriate terms without feeling like a random info-dump or a lecture. It's just a discussion of who she is, like any discussion of Blitzen as a dwarf or Samirah as a Valkyrie.

And speaking of Samirah, we see a lot more about how she balances her duties as a Valkyrie with her values and beliefs as a Muslim. We get the technical discussion of how she reconciles her faith with her existence in a world of Norse deities, and a deeper exploration of her culture and family life. Add this to meeting Hearth's horrible family and learning more about his upbringing, and this book really opens up the characters in this series.

Plus, it looks like we're heading toward crossover territory by the end, so I am absolutely counting down until book three is released this October!

Verdict: Affirmed. This installment really elevated the Magnus Chase series by fleshing out the side characters, and I can't wait to read more.