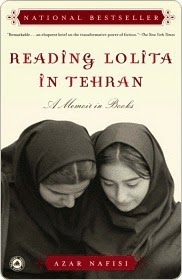 Azar Nafisi's memoir on her time teaching English literature courses while she lived in Iran is a heartfelt introduction to modern life in a country about which few Americans know a great deal. That being said, as both a lover of literature and a student of Persian (Farsi) for four years, I expected a bit more from this much-beloved novel.

The memoir opens as Nafisi recounts the underground literature course she taught in her home with seven young women. The first part gives the reader glimpses of these women's various personalities, and a sense for how they came together. Peppered throughout the narrative are descriptions and analyses of Nabokov's "Lolita," with stories of its reception in Nafisi's classes and connections to her life and those of her students. It's an interesting approach, but one that felt a bit thrown-together. The passages didn't flow in and out of the narrative as well as I would have liked, so the transitions felt abrupt and jarring at times.

The memoir then goes back in time, with two passages in more-or-less linear chronology. The first, on the revolution and the cultural aftermath is interspersed with "The Great Gatsby," and the third, on the Iran-Iraq War discusses Henry James. Perhaps because it is the work with which I am the most familiar, I felt the Gatsby section to be the strongest, with smoother transitions, clear metaphors and analogies, and anecdotes to which I could more easily relate. In contrast, as someone who knows very little about Henry James, the literary passages and analogies in that section fell flat. They often distracted from the more interesting descriptions of life in Tehran during the Iran-Iraq War, without adding to my understanding of the everyday experiences of a Tehrani during that time.

The final section returns to the underground book group, interspersed with analogies to Jane Austen's novels, primarily "Pride and Prejudice." I have not read any of her work, though I intend to at some point, so this section left me skimming the literary passages as I tried to avoid spoilers while still grasping the larger point of the analogy. Admittedly, this is a less-than-ideal reading strategy, and any dislike for this part is my own fault.

Nafisi's carefully-constructed portraits of her students and acquaintances make this book worth the read. Her descriptions of students supporting the regime are fair, indicating an impressive empathy for those with whom she disagrees. Nafisi demonstrates a strong command of language, and my Kindle edition is filled with highlighted passages that I am excited to discuss.

Verdict: Affirmed, for book lovers eager to learn more about Iran shortly pre- and post-revolution. However, you'll have a much greater appreciation for the literary analogies if you read the reference literary works prior to this.
Posted by Nicole at 5:58 PM