"I'll Give You the Sun" by Jandy Nelson 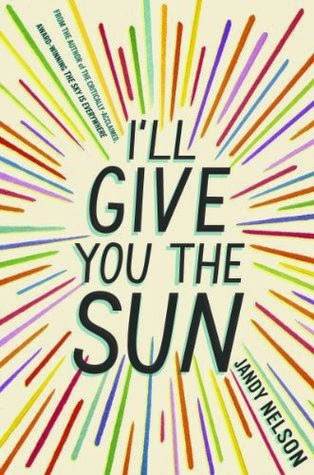 This book was all over bookstagram last year, and after my ebook hold finally came through, I tore through it. This novel deserves the awards and acclaim it received.

Jude and Noah are artistically-inclined twins, the product of a whimsical free-spirited mother and an athletic, by-the-book father. Guided by their mother, they plan to apply to an arts high school. Flash forward, and their lives look remarkably different - their mother has died, only Jude is at the arts school, and Noah is acting shockingly normal. Jude and Noah each have their own secrets, tragedies, and wrongs committed. The novel alternates between Noah's POV before their mother's death, and Jude's three years later, as the twins navigate the gradual unveiling and untangling of their secrets, come to terms with their losses, and find each other again amid the chaos of being teenagers.

Nelson gives Noah and Jude such unique voices. Her use of language, with Noah viewing the world through an artist's eye and Jude through her grandmother's folksy charms and suggestions, originally caught me off-guard but grew to be one of the features I most enjoyed. I only wish there was artwork to compliment Noah's vivid description. This book is begging for an illustrated version. From a plotting perspective, the way Nelson balances the two timelines to manage the secret reveals and creates dramatic irony adds to the suspenseful, heartbreaking tale. Jude and Noah's stories are so inextricably interwoven, and her careful crafting of the dual plot lines is awe-inspiring.

Verdict: Affirmed, for fans of YA and family stories. This book surprised me in all the best ways - I had underestimated it, and it turned out to be much more than I had hoped.