Since I spent spring break visiting my grandparents in Florida, there was a lot more sitting on the porch than sitting on the beach. And that meant audiobooks (& cross stitching!) since I didn't have to worry about sand getting into my phone. Results were pretty mixed, so here's a quick round-up:

This book. I had such high hopes! It's a slim little volume, and in retrospect I think I would've appreciated it more in print. It takes place in present day, but for some reason (probably because it's centered around an aspiring jazz singer), I thought it was set earlier. I was confused by references to modern day, and it took me a bit to get over that. I like Madeleine, the nine-year-old jazz singer at the center of the story, and her teacher Sarina Greene, but many of the other characters fell a bit flat. The voices used for the club owner and his friends were a bit grating. It's clever how it all comes together, and I like the timeline structure of the novel a lot. Yet, I expected more from this due to the high praise it received.

"Ruby" was easily my biggest disappointment of the break, but it was mostly my fault. I trust Oprah's book recommendations implicitly, and have never been led astray. As a result, I didn't read any descriptions of this before requesting it from the library. Unfortunately for me, there's a heavy dose of magical realism and mysticism throughout this novel that spoiled the otherwise heartbreaking love story. The novel explores resiliency in the face of the tangled web of horrors that people inflict on each other and perpetuate toward others. The love story between the main characters was beautiful, and I only wish that my personal dislike of magical realism didn't get in the way of what otherwise would have been a powerful read. 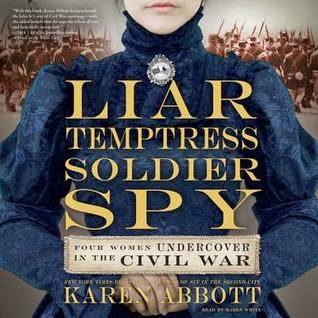 My audio loan expired halfway through listening to this nonfiction book earlier in the semester. I was so bummed to have to get to the back of the line to finish it! It's a fascinating book, telling the story of four women who were worked as spies and soldiers on both sides of the American Civil War. I only knew the cursory details of the War that I learned in middle and high school, so I appreciated the depth and detail provided in this book. It really reads like a novel, complete with dialogue Abbott found in the women's diaries or other written accounts by those who encountered them. For a thick book, it was a fast, easy listening. I was spellbound by these strong women's true stories, and highly recommend this to non-fiction and American history fans.
Posted by Nicole at 7:05 AM