"All the Bright Places" by Jennifer Niven 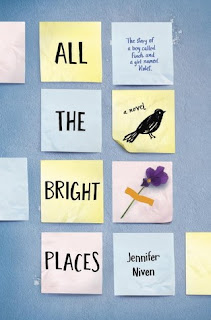 I almost put this book down, despite the overwhelming love for it on #bookstagram. The opening felt cliched - boy and girl save each other from suicide, work on a school project together, fall in love and help each other tackle their respective challenges. I thought I'd read this story line before, and wasn't particularly interested in reading it again.

Luckily, I stuck with it. Finch is a troubled bad boy, known for his emotional outbursts and odd behavior. His home life is in shambles - his dad left for another family, and his mom isn't so great at taking care of him and his two sisters. Violet is a popular girl, new to Indiana, and still coming to terms with her older sister's death in a car accident. She's lost her interest in writing, and much of anything as her struggles to cope with her loss. As they work on their project to explore Indiana, they grow closer and come to understand each other.

I started to come around because of Violet's initial behavior toward Finch, avoiding him and hiding their relationship. It's sad but realistic for a high school girl still figuring out who she is and where she belongs. This book goes on to go places other YA books stray away from, tackling suicide, mental health, and death in a more honest and real way than other YA I've read on these themes. Things aren't neatly tied up in a bow, resolved through the incredible power of adolescent love. The protagonists struggle, and the adults around them struggle, under the weight of their personal histories and mental health challenges.  This is an important book for teens, and I hope it makes it onto many required reading lists.

Verdict: Affirmed. I was surprised by how much I like it, and hope this finds its way into many, many teens' hands. Side note, the dual audio narration was also great, particularly by Ariadne Meyers who also did "We Were Liars."