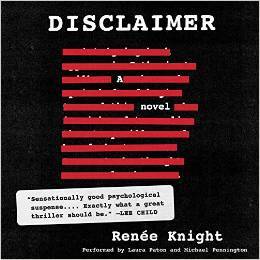 I wish I remembered what list suggested this novel. It was one that included "Unbecoming" and "The Girl on the Train," both of which I think far surpass "Gone Girl" as crossover thrillers. I looked a little closer at everything else on the list as a result. After reading "Disclaimer," I'd add every other title on that list to my TBR if I could only find it!

The book opens on Catherine, shocked to discover that a novel portrays a thinly-veiled version of herself, recounting events that only she should recall. Anyone else who would have known should be dead. Someone is tormenting her with this information, and its wrecking havoc on her life. Catherine must figure out who and why before her secret is revealed.

The novel alternates between Catherine's perspective and that of her tormentor, and the audiobook uses a different narrator for each perspective. Most importantly, and most brilliantly, the characters have motives for their actions in this book, and the motives actually work. These motives might not be clear initially, but by the end you as the reader can figure out why each character does what they do throughout the novel. This doesn't mean you'll like everyone - far from it. But the book rings far more true as a result. There are no actions that seem to be taken simply to move the plot forward, an impressive feat for a thriller.

Moreover, this novel digs into themes of family and the truth - what makes us believe certain people over others, and how can these layers of trust and shades of truth affect our relationships? How should we, and do we, react when we learn new information about those we love? Do we squeeze it into the picture we already have, or do we amend our image of them to fit this new information? It's a deeper read than many thrillers, and one I'll continue to ponder, despite having listened to the entire thing in a single day.

Verdict: Affirmed. If your book club liked "Gone Girl" but found your discussion fell a bit flat, try this out. It has the same compulsive readability, with some deeper themes tossed in to sustain a lengthier discussion.

"Disclaimer" by Renee Knight, published May 19, 2015 by Harper. Audio narration by Laura Paton and Michael Pennington, published by HarperAudio.
Posted by Nicole at 10:10 AM