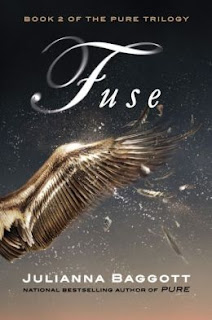 I wasn't kidding when I said last week that I'd be heading straight to the next two books in Julianna Baggott's Pure Trilogy. I'm pleased to say Fuse was even better than the first.

To avoid spoilers for "Pure," I'm going to skip the summary & go straight to what I liked. Mainly, El Capitan and Helmud. I talked in my first review about the compelling cast of characters Baggott creates with her rotating points of view. While all characters get significant development and adequate time in the spotlight, for me this book was all about Capitan and his fused-to-his-back brother Helmud.

The romances from the first book are still here, and play a much larger role. They no longer feel shoehorned and forced - if you read this without the first, you'd just assume these are real, fully-developed relationships. It's only because I remember their shaky foundations from the first novel that I'm still meh on them. But Cap's relationship with his brother is real. The stress, obligation, guilt, pride, and love that he feels are well-drawn and deeply explored. I could connect with him and understand the difficulties he faces and the guilt he feels for the resentment they cause. His romantic feelings felt similarly well-developed. They weren't rushed into the first book, so his gradual discovery of them felt organic and earned.

This installment packs more puzzles and allusions as some of the characters head back to the Dome and others continue their search from the first book. This was an excellent second book, and I'm glad I can go straight on to the third!

Verdict: Affirmed. One of my few five-starred books on Goodreads this year.