"Pretty Is" by Maggie Mitchell 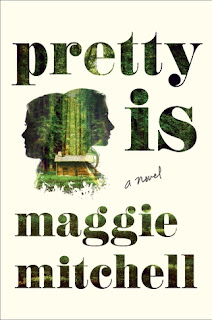 This is the last novel off that mysterious list of thrillers that I can no longer locate, but that led me to some truly excellent reads. I expected a thriller of the same caliber going into "Pretty Is," but found something very...different.

Lois and Carly Mae were kidnapped and held in a cabin in the woods when they were twelve years old. Now adults, they have each forged their own life & worked to put this piece of their past behind them. Lois is a successful professor who published a fictionalized account of her kidnapping that is now being made into a novel. Carly Mae, now Chloe, is an actress who hasn't quite made it, but will be starring in the movie of Lois's novel as the detective determined to find the two kidnapped girls. Confusing? Just a bit. Plus, there's a stalker-ish student who may be their kidnapper's son lurking around Lois's life.

The novel gets a bit meta, but it doesn't seem to be intentional. Or at least, there doesn't seem to be a message within this book about a movie being made from a book written by a character about her own kidnapping, starring her fellow victim. The amount of layering struck me as bizarre since I couldn't find a thematic point to it. Maybe I missed it.

But the novel isn't without its strong points. So many thrillers take you through the build-up, crime, and brief resolution. This novel picks up after the crime has already happened, and shows you how the victims are coping as adults. Lois and Carly Mae both try to distance themselves from their experience, while fostering a connection through the novel or film. They don't want to discuss their experience, but they can't discard it and fully move on either. The novel is about how they're coping, and that's not something thrillers typically provide.

Finally, the audio narration was superb. Tavia Gilbert and Nicol Zanzarella each voice one of the female leads, and their voices are different enough that you can easily tell which character's point of view you're listening to at any given moment. It sounds like a small thing, but it makes a huge difference when you're listening intermittently.

Verdict: Jury's Out. Don't be misled and go in expecting a typical thriller with shocking twists. The action-y parts were my least favorite, and I think the novel would have been stronger without them (and the stalker student entirely). But if you're interested in what happens after most thrillers end, this is worth checking out.