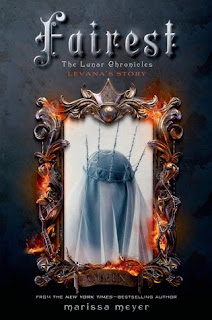 "Fairest" is a bridge novel in the Lunar Chronicles, set (and released) between books 3 and 4, "Cress" and "Winter." It tells Levana's back story, and what a back story it is.

Levana was raised on the moon, the second daughter of the royal family. Her parents die when she is a teenager, and her cruel older sister Channery becomes queen. Meanwhile, Levana is enticed by the prospect of ruling herself, and falls in love with a married palace guard.

Though Levana's upbringing is horrible - absent parents and an abusive sister, never mind the additional pressures of palace life - she is nevertheless absolutely bonkers. She's cruel and sadistic herself, likely a combination of learned behaviors from her family and some sort of innate, inherited trait. She has her own brand of insanity, subtly different from her sister's and indifferent to the needs and desires of others.

This story does not attempt to make you sympathize with Levana's crazy. You may understand it, and her, better at its conclusion, but it did not make me like her. It's a hard line to walk, but Meyer walked it well. I hated Levana, but wanted to know what she would do next & why she takes the actions she takes in the main series. This novel gives her back story, fills in the gaps, tells you what's under her veil, literally and figuratively. Yet, her image as a contemptible evil queen is intact, and you can continue rooting against her for the final novel in the series with a deeper understanding of who she is and why.

Verdict: Affirmed. The insight into an awful character with a mysterious background builds upon the solid foundation laid in the main series, and I'm sure the insights gained here will only add to my enjoyment of "Winter."