"My Life on the Road" by Gloria Steinem 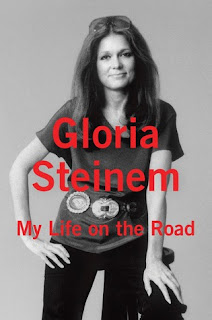 I hadn't paid much attention to the release of Gloria Steinem's "My Life on the Road" when it was first release. I wasn't even interested when I read that Emma Watson chose it as the first pick for her feminist book club Our Shared Shelf. Then recently, I listened to an episode of the NYPL podcast that featured a discussion between Gloria Steinem and Roberta Kaplan, the lawyer who argued and won U.S. v. Windsor, the landmark marriage equality case overturning the Defense Against Marriage Act. Their 95 minute conversation covered a huge variety of topics and was remarkably inclusive - opening up the mic to audience members who wanted to ask questions and share their own stories. After finishing, I was proud and inspired, and put Steinem's book on hold.

Luckily, I finished Steinem's book just days before her sexist, patronizing comments about women who support Bernie Sanders, or I likely would have been dissuaded from reading or finishing the book.  And I would have missed out. (She has since issued an apology.)

Prior to reading her memoir, I was vaguely familiar with Steinem as an important figure in feminism, as someone worthy of respect and admiration for all she had accomplished. But I had never read her writing directly or heard her speak. I was struck in listening to the NYPL podcast in how inclusive she was in her conversation, inviting others to tell their own stories and looking to the audience for answers. This is an approach she has followed throughout her life. Her memoir is full not only of her own story, but of the stories of others with whom she has interacted or worked closely. In reading this book, of course I learned about Steinem and her approach to feminism. I also learned about the massive influence of Native American cultures on the founding and continued history of the United States and the internal dynamics at play in the feminist movement writ large.

Upon finishing this book, I recommended it widely. Then the Sanders comments broke. I still stand by my recommendation and greatly admire Steinem, with a reservation in the spirit of her inclusive approach: This is her story, and her approach to feminism. You may not agree entirely with her approach or politics, but her view is worthy of consideration.

Verdict: Affirmed. This memoir provides a jumping off point into feminism for those unfamiliar with the movement in the US since the 70's, as well as a view to consider in dialogue with your own.