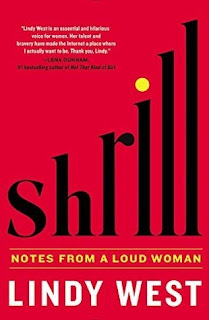 I've been casually bumping into the work of Lindy West online for a few years, without realizing it was coming from the same incredible, inspiring woman. I first heard from her on This American Life, when she confronted an Internet troll who impersonated her deceased father to harass her. She is also a vocal critic of rape jokes as comedy and the founder of the #ShoutYourAbortion campaign. Her recent memoir expands on these stories and her work as a fat acceptance advocate and journalist.

Prior to reading "Shrill: Notes From a Loud Woman," I didn't know that West writes extensively about her life as a fat woman. She is reclaiming the word "fat" as a simple descriptor, rather than a source of shame (it is her preferred term, and so the one I will continue to use throughout this post), and working to combat the many negative stereotypes and harmful slights and insults suffered by the overweight. I also didn't realize that the same woman was behind the three works I mention above. In her memoir, West traces how she came to be he outspoken advocate she is today - how she grew out of and worked to overcome intense shyness, how she developed her views, came into her voice as an advocate, and honed her skills as a journalist and pundit. She shares openly from her personal life, speaking of her marriage and the death of her father with courage and great love for her family. West writes and narrates her audiobook with wit, crass metaphors, and deserved pride in the woman she knows herself to be

At the heart of "Shrill," though, is a call to arms. Women, fat people, and really all marginalized people, need to be supported and recognized as fellow humans, not shamed for whatever feature society has arbitrarily deemed unacceptable. She writes about being a woman and being fat specifically because these are the communities of which she is a part. Her underlying message of acceptance and understanding, though, is one that we would all do well to take into all facets of our lives.

Verdict: Affirmed. West is a force to be reckoned with, and a woman whose work I hope more will discover. I can't wait to see what she does next.