"The Underground Railroad" by Colson Whitehead 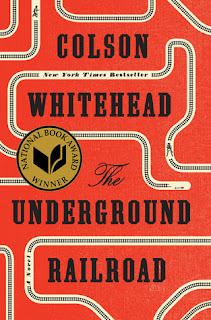 FTC Disclosure: I received an e-ARC from the publisher through NetGalley in exchange for my honest review. I purchased a signed first edition out of pocket when I found one at my local bookstore, though. Wasn't going to miss that opportunity!

Everyone has heard of this novel by now, and likely of the fact that Oprah liked it enough to get its release pushed up an entire month so she could feature it in her book club.  I had received an early review copy & had been saving it for after the bar exam  to review in time for the September release. Instead, Oprah scooped me. But Whitehead is deserving of such heaping praise.

The novel follows Cora, a slave whose mother is the only slave ever to have escaped successfully from the Randall plantation in Georgia. Cora faces horrors both unspeakable and far too common for a slave, and becomes a runaway herself.  From there, Whitehead builds on the mistake all young children likely make - that the Underground Railroad is an actual railroad & uses the device to visit several states, each treating its black population with a unique form of cruelty.

There are highs and lows in this novel, but the highs are glorious. The ending is beautiful, and brought tears to my eyes. But I'll admit, I stalled at some parts. The novel alternates between vignettes telling the story of those Cora encounters, and large chunks of her tale as she reaches a new state. The structure works, but the longer chapters dragged at times, for me. I don't think this is a problem all readers will face; dreading a long chapter after I've completed a short one is a tic of mine, especially short ones as self-contained as the vignettes here. I do wish Whitehead had pushed the conceit of the novel a bit further, traveled another stop or two. Yet overall, the writing is great, the story will stick with you, and this book is worthy of the praise it has received.

"The Underground Railroad" by Colson Whitehead, published August 2, 2016 by Doubleday books.
Posted by Nicole at 7:22 AM