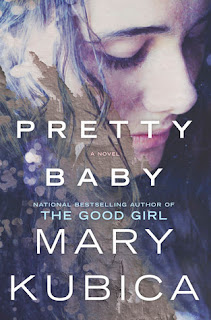 FTC Disclosure: I received an e-ARC from the publisher through NetGalley in exchange for my honest review. I checked out the audiobook from my local library through Overdrive.

I loved Mary Kubica's debut thriller, "The Good Girl." So, when I saw her follow-up on NetGalley, I jumped at the chance to request it. Then life got in the way, but I am glad I finally made time to listen to this novel on audio. As I mentioned in my brief Goodreads review, "Pretty Baby" is not the thriller I expected after the "The Good Girl," but a quieter psychological mystery. There weren't any big twists. Instead, I enjoyed getting to know the three main characters and figuring out what makes them tick.


Heidi first sees Willow struggling with a young baby on a subway train, and then again at a library. She reaches out to try to help the young girl without knowing anything about her or her history. Heidi's husband Christ is suspicious of Willow, and questions his wife's decision to bring her into their home. The narrative rotates between the three, gradually giving readers access to each character's past and motivations. The audio narration features three different narrators who bring distinct voices to each character to great effect.

Willow and Heidi's narratives were compelling throughout the novel, while Chris's lagged initially. In particular, Chris's subplot with his seductive co-worker felt a bit out of place, but I guess it gave him something to do and think about for the bulk of the novel. Structurally, it gave him a reason to miss his wife's psychological trauma until an opportune moment in the plot, though there's probably a better way to handle this. Where Kubica shines is showing how different people interpret the same events and others' actions, projecting their own concerns and troubles into the lives of others.

Verdict: Affirmed, if you know this isn't the fast-paced thriller it's marketed as, but an unsettling, intriguing psychological drama.

"Pretty Baby" by Mary Kubica, published July 28, 2015 by Mira. Audio narration by Cassandra Campbell, Tom Taylorson, and Jorjeana Marie on July 28, 2015 by Blackstone Audio, Inc.
Posted by Nicole at 7:09 AM