"So You've Been Publicly Shamed" by Jon Ronson 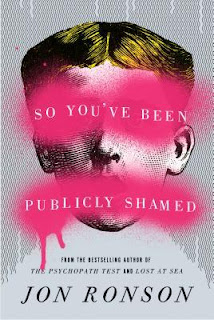 In "So You've Been Publicly Shamed," Jon Ronson explores a timely, highly-relevant topic as more and more people post more and more about their lives on the internet. He delves into the phenomenon of mass-internet shaming that seems to be ruining people's lives more and more frequently.

Ronson's book opens with several stories that will be familiar to internet users - a woman whose racist tweet went viral while she was out of contact on an airplane and had lost her job before she landed; another woman whose disrespectful photograph of an inside joke spread outside her Facebook friends and also cost her her job; a race car driver whose sexual escapades were made public and who managed to save his reputation. Through these stories and historical and psychological research, Ronson examines why and how societies shame and what effect that shaming has on its targets and on society itself.

The subject matter itself is fascinating. Layered on top of this is a compelling narrative structure. Ronson set out to investigate an instance of public shaming, and ended up delving far deeper. He thought he was telling one story: how someone came to be publicly shamed and what happened to their life after. In researching and telling this story, his belief in the benefits of public shaming were shaken to their core. He admits he has personally participated in internet shaming and felt justified in doing so. Over the course of researching and writing this book, Ronson changes his mind on the utility of public shaming and recognizes the harm it does to the target and society. His frankness about the changing of his own mind adds extra opportunity for readers to reflect on their own internet use and beliefs around this topic. The book ends with a compelling call to reflect on what shaming accomplishes and for a shift toward more respectful, compassionate dialogue that goes broader and deeper than a single viral incident.

Verdict: Affirmed. This book is a must-read for any internet user - the more of your life that you put online, and the more you participate in the internet as a discussion forum and society of its own, the more important and relevant this book is to your life.

"So You've Been Publicly Shamed" by Jon Ronson, published March 31, 2015 by Riverhead Books.