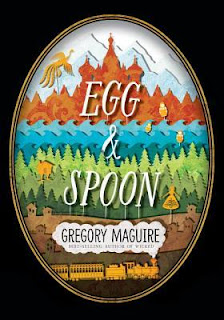 Thanks to Audiobook SYNC for providing yet another great audiobook! Though this one's download period is up, they'll be giving away two titles per week through August 17, 2016, so check in every Thursday to see what's new.

Elena is the pauper, a poor Russian girl living with her dying mother while her brothers are away. Ekaterina is the prince, a wealthy girl traveling by train to meet the nephew of the Tsar when she meets Elena during a pit stop. The set-up getting them to swap places was the dullest part of the book. It really took a while to get everyone situated and put all the necessary plot elements in place. During parts 1 & 2 out of 11 on audio, I considered abandoning this book for fear it would never get any more interesting then two girls comparing their vastly different lives in unsurprising ways.

I'm glad I waited it out. Ekaterina meets Baba Yaga after their switch, and things really pick up. Baba Yaga is a time-traveling, child-eating witch living in a house that walks around on chicken legs. She brought levity and wit to the story, generally keeping things interesting even when the plot itself wasn't moving too far along. As they work to reunite and swap places, Ekaterina and Elena learn about themselves, and ultimately embark on a mission with Baba Yaga, the Tsar's nephew, and a few other characters to figure out what exactly is wrong with the magic in Russia. The girls grow and learn more about themselves along the way, of course. Like Sam in "Every Last Word," this book's  SYNC-paired-audiobook, they come into their own and learn to see themselves in new lights, capable of more than they had previously believed.

Verdict: Affirmed. Even though the book felt clunky at times, with some less-than-deft maneuvering of characters from place to place, it turned out to be a really enjoyable read. For fans of Gregory Maguire generally, fantasy, or fairy tale retellings specifically, "Egg & Spoon" is worth checking out.