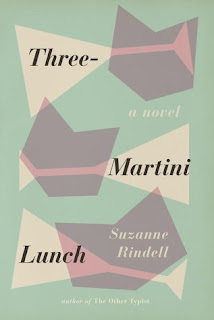 As someone who made time to read every day throughout both undergrad and law school, I shrugged off people who told me bar prep was different. Undergrad and law school had scared others off from reading, too, and I had survived both with my love of literature and insatiable urge to read in any spare moment fully intact. What I hadn't anticipated about bar prep, though, is the sheer lack of down time, and even spare moments. There is so much to cram into my head that a spare moment should be spent with a handful of flashcards, not a few pages of a novel. Nonetheless, my dog needs walks, which means I need audiobooks. If there are good bar prep podcasts out there, I definitely do not want to know about them.

"Three-Martini Lunch" by Suzanne Rindell was recommended by several book podcasts and blogs while I was still in New York, and I'm sorry I can't remember any of them as I write this. Set in 1958 New York City, it tells the story of three 20-somethings whose lives are intertwined with the publishing industry. Cliff wants to be a writer, Eden wants to be an editor, and Miles wants to find out more about his father while working as bike messenger for the publishing houses. The novel explores each of their own identity issues as their lives intersect and they interact with one another - Cliff is the son of a famous editor, Eden is navigating the male-dominated industry as a young Jewish woman, and Miles is an African American man working through his sexual identity while trying to learn of his father's past.

The characters are all well-developed and interesting. Cliff is the least so, but his perspective is something of a linchpin without which the other two would seem only glancingly tangential. Miles is by far the most interesting, and the novel could have stood on its own with only his narrative. But I'm generally a fan of rotating narrators. It ultimately served this novel well, particularly with respect to the setting. Rindell showcases the city through the eyes of three young people who each experience it very differently. From Greenwich Village to Harlem, the novel portrays the different neighborhoods and communities throughout the city in their own lights, cognizant of what people feel at home in each and why.

Verdict: Affirmed. In addition to the excellent story, each character has their own narrator, and all performances shine. Rebecca Lowman in particular does wonderfully as Eden, which comes as no surprise since she has a history of excellent audio performances, including "Fangirl" and Rainbow Rowell's other novels.