"How to Make White People Laugh" by Negin Farsad 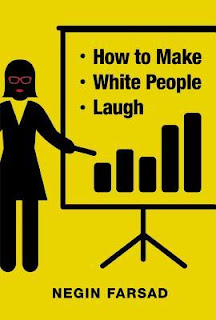 Negin Farsad does social justice comedy, a thing she invented to use humor to bring people together. As an Iranian-American Muslim women, she uses her own identity crises as the basis for her comedy and as a launching pad for her message of inclusion and cross-cultural understanding.

I was fortunate enough to see Farsad speak at Politics & Prose on her new book "How to Make White People Laugh." You may also know her as a TEDFellow, or for her films "The Muslims are Coming!", "Nerdcore Rising", or "3rd Street Blackout". Her talk at Politics & Prose pulled heavily from her book, though she presented it like a stand-up comedy routine. It was one of her first events on her book tour, and I found her answers during the Q&A particularly entertaining and endearing, especially when she spoke of her parents. I chuckled along & happily picked up her book.

I didn't realize just how heavily her talk pulled from the book until I was reading and recognized many of the jokes verbatim. And then I watched her TED Talk from 2013, recognized the jokes & general direction, and realized it's basically the introduction to her book. But as I read on, I cared less and less. Negin's comedy is comprised of poop jokes and cursing and heartwarming moments by turn. There's a little something for everyone. And her message is inspiring and important. It boils down to getting to know each other a little better, so that society can become more accepting and understanding of everyone. She puts herself on the front line of this mission, using humor and her personal story to humanize Muslims to white, mainstream America.

Verdict: Affirmed. Pick your medium - whether you watch her TedTalk, read this book, or see her perform, Negin Farsad's social justice comedy is worth checking out.

"How to Make White People Laugh" by Negin Farsad, published May 24, 2016 by Grand Central Publishing.
Posted by Nicole at 1:44 PM