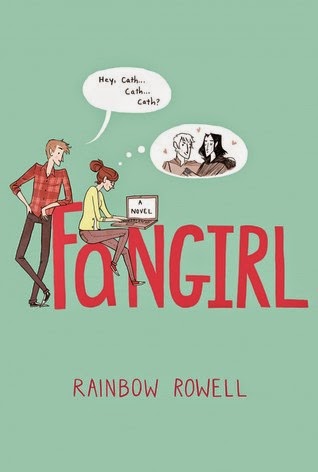 Some of you may know I have a mostly-bookish instagram account. It's been great to follow other readers & get a feel for who's reading what now. After loving Eleanor & Park, I was trying to decide which of her novels to read next. The love for "Fangirl" was so overwhelming on my instagram feed, I decided that's where I'd head. Thanks for the solid choice, bookstagrammers.

All I knew heading in was that the main character writes fan fiction in a fictional universe resembling Harry Potter. True, but this book is so much more than that. I'm impressed by the sheer volume of themes covered in this novel. More impressively, each is covered with adequate depth and with an awareness of the way that a disturbance in one aspect of your life has effects rippling across all other areas. In real life, trauma in your home life is not isolated from your school work and friendships, and this book captures those interconnections.

Cath, author of the enormously popular "Carry on, Simon" fan fiction is only 18 and headed off to her freshman year of college with her twin sister Wren, who decided she doesn't want to room with Cath. Cath struggles to find her place in college among her harsh roommate Reagan, Reagan's ever-present boyfriend Levi, her upper-level writing classmates, and Wren's new circle of hard-partying friends. Meanwhile, she's concerned about her neurotic father's health back home.

Rowell gets the upheaval, stress, and uncertainty of freshman year. Levi says at one point, "Months are different in college, especially freshman year. Too much happens. Every freshman month equals six regular months." This novel gets that freshman year of college is at once exciting and overwhelming, infantilizing and responsibility-imbuing. A ton happens in a single year, and you don't return home the same person you were when you left.

One final note - while the novel is about a girl who writes fan fiction, and Cath's fandom is certainly a large part of who she is, the novel seems to have been mis-marketed as solely about Cath's Simon Snow obsession. The discussion of fan fiction may be the book's distinguishing characteristic, but it's far from its defining theme. At it's core, "Fangirl" is about our relationships with family and friends, and how those relationships both shape who we become and evolve as we come into our own.

Verdict: Affirmed for fans of YA. If you're an adult into fan fiction or coming-of-age-in-college stories, pick it up, but I wouldn't recommend this as a general crossover. Solid audio narration by Rebecca Lowman, though Maxwell Caulfield's reading of the brief Simon Snow excerpts felt a bit silly at times.

"Fangirl" by Rainbow Rowell, narrated by Rebecca Lowman and Maxwell Caulfield. Published on September 10, 2013 by Listening Library.
Posted by Nicole at 1:31 PM