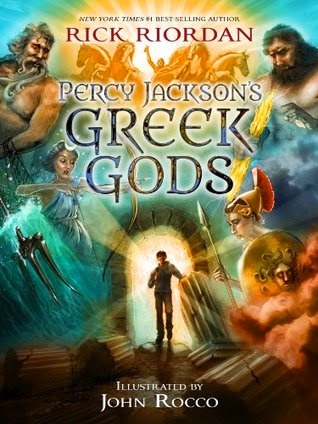 I've been a fan of Rick Riordan's Percy Jackson series for a couple years now. They're quick, fun reads with a diverse cast of characters, an intriguing premise, and fairly direct plots and superb narration that make for great audiobooks. I'm bummed the second Jackson spin-off series is already at a close with the recently published "The Blood of Olympus," but looking forward to his new series tackling Norse mythology expected some time this year.

"Percy Jackson's Greek Gods" is a companion to both the Percy Jackson & the Olympians and Heroes of Olympus series. In it, Percy tells the stories of the major Greek Gods. They're told in his own voice, so readers of the series will find references to other characters from the novels and their various adventures. That being said, it's a solid introduction to mythology for anyone, young or old, interested in learning a bit more without getting too bogged down in more academic texts. It can be your entry to the world of Percy Jackson, or a supplement if you're already a fan.

As the Goodreads reviews mention, the book does an impressive job sanitizing the rape, incest, and other ickier bits of Greek mythology without revising the stories. Gods "get cuddly" and have god and demigod children, and Percy comments on how weird it is that Gods don't care about dating their relatives.  If your child is interested in learning more about the Greek pantheon after reading the novels, this is a safe, entertaining choice to give them. You'll probably learn something new, too. I definitely did.

Verdict: Affirmed, for anyone whose interested is piqued regarding Greek myths, whether you're young or old.