"The Crown" by Kiera Cass 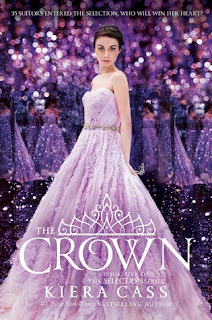 Despite my mixed reviews of the previous books in The Selection series, I was excited to get off the holds list quickly for the final installment. With graduation and moving back to DC permanently, it was perfect timing for a light read. Like the rest of the series, this book has a lot of problems, but still kept me reading.

First, the good: The audio narration is excellent, as always. The premise of this book is absurd, but juicy and entertaining if you're not expecting something with substantial depth. The world is intriguing, and my biggest complaint throughout the series is that not enough was done to flesh out the world and provide it with a proper history. It's nice to see America and Maxon as adults.

But, two large complaints: Eadlyn goes from being insufferable in the first book to being a completely normal, compassionate human in this book. There is no growth, she just does a fairly complete 180. In my last review, I predicted she'd grow, but we don't actually see that happen. She's just suddenly a better person, despite this book picking up exactly where the last left off.

Similarly, the ending is almost completely unfounded in anything that came before. These books did not adequately explore the political machinations of this world, and the last two installments are particularly bad at it. Ending the book with a large political decision from Eadlyn misses the point of what these books turned out to be - they were about the dating game, not the politics (much to my great disappointment). If the books were going to center primarily on the Selection, that's what the ending should have focused on as well.

Verdict: Jury's Out on the series, dismissed on this installment.  If I had known how it ended at the outset, I probably wouldn't have started. Yet, I can't bring myself to fully dismiss this series, because it kept me listening for all five books. I was clearly engaged enough to keep requesting them from the library, despite the many bothersome bits. In the end, though, I ended up disappointed in the ending, and really books four and five entirely, as they reflected much of my problems with the series as a whole. If you're interested in the series, I recommend sticking to just the first three.