"Vivian Apple at the End of the World" by Katie Coyle 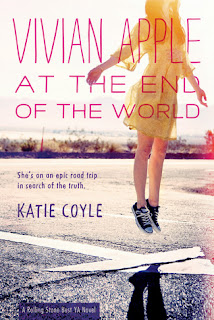 Due to finals, I've been listening to more podcasts while walking the dog than audiobooks (they're shorter, so less temptation to continue listening once I get home). But last Thursday (5/5) was the first day of AudiobookSYNC, a fantastic program from Audiofile magazine that provides teens (& anyone else over the age of 13) free pairs of audiobooks - one new and one classic - every week for the summer. So I downloaded the first pair, and the "new" title got me right back into audiobooks with a compelling story & fantastic narration. Best part - this book is still available until Thursday, 5/12 when new titles come out - so go download it now!

"Vivian Apple at the End of the World" by Katie Coyle tells the story of the rapture, and those left behind. 17-year-old Vivian doesn't believe her Believer parents who tell her the rapture is coming. But when she comes home from a party and finds two holes in her ceiling and no parents, she has to confront her new reality. But something seems off about her parent's disappearance. Along with her best friend Harpreet and a new crush Peter, she sets out to find the family members who may not have been raptured, and figure out what's actually going on.

I listened to this audiobook from start to finish the day it came out. It's a quick story with clues to the mysteries at the center doled out well - enough to keep me interested, but still guessing. There are twists I didn't see coming, but didn't feel out of place, which is always a hard line to walk. But best of all is watching Vivian come into her own. She describes herself pre-rapture as meek, with the superpower of blending into the background. Post-rapture, she knows she must take control of her life if she wants to survive and get to the bottom of everything happening around her. Since the novel is told from her point of view, the reader sees her grappling with overcoming her timid nature and learning to assert herself.

Verdict: Affirmed. Recommended for YA fans, especially those who like post-apocalyptic works. I went straight on to the sequel & downloaded the book this was paired with as well. Can't wait to start both.