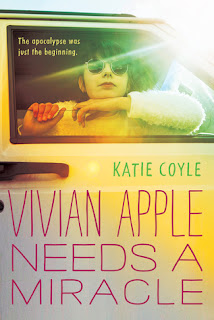 I loved the first book in this duology, "Vivian Apple at the End of the World," thanks to AudiobookSYNC. Luckily, its sequel, "Vivian Apple Needs a Miracle" was available in audio from my library through Overdrive. I checked it out immediately, and like the first, I finished it in a day.

Coyle picks up the second book where the first leaves off. Vivian & Harpreet have figured out the mystery behind the rapture, and now they're on a mission to do something about it. (Keeping things vague to avoid spoilers!) Where the first installment was a mystery, this one is an action-packed adventure story. It's fast-paced, with one development coming right after another so the story just barrels along at a delightful, engaging breakneck speed.

All the characters from the first who are still around make their way into the second in natural, sometimes surprising, ways. It's great to check in with the full fascinating cast, but watching Vivian develop into a strong young woman who is determined to continue taking charge of her life and the situation around her remains the highlight of this series. I also appreciate the central relationship between Viv and Harp as two strong women who support each other and become each other's found family amid a chaotic backdrop.

Verdict: Affirmed. If you like the first, move straight on to the second for a fast-paced adventure that wraps up the story nicely.