"The Ramblers" by Aidan Donnelly Rowley 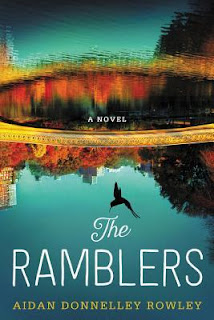 In New York City, Clio faces a decision about where she wants her relationship with her boyfriend to go. Her best friend & roommate Smith is still reeling from the break up with her ex while coping with her sister's upcoming wedding when she meets Tate, who is coming off his own separation from his wife. The novel follows these three 30-somethings over the course of a week or two as they figure out how they got to this point in their lives & where they want to go from here.

The first half of the book had me hooked. I liked the main characters, and the secondary cast was intriguing. Rowley gets New York City, so the book is littered with allusions that will ring true to anyone familiar with the city. Unfortunately, once the stage was set, the pace slowed. It's possible this was intentional, given the title and the message Rowley is trying to share about this time in her characters' lives. Yet, days stretched out to dozens of pages more than felt necessary for characters I already knew. Multi-page descriptions of characters' morning routines
are a pet peeve of mine. It wasn't enough that I put down the book, or even to make me dislike it as a whole. It was just enough that things dragged & I wasn't as compelled to pick it up again as I was at the start.

Verdict: Jury's out. It won't be the first book I recommend to someone looking for lighter literary-ish contemporary fiction, due to the pacing issues. But it's probably make a long list, especially for readers interested in the privileged NYC setting.

"The Ramblers" by Aidan Donelly Rowley, published February 9, 2016 by William Morrow.
Posted by Nicole at 1:41 PM